Lanscombe Herd Visit, Dorset. 8th May 2022
The day started at the Halsey Arms some two miles away from Henley Farm for a slap up roast carvery and delicious puddings. After a leisurely drive we arrived well on time to see a wonderful and well prepared array of magnificent hereford cattle including their very impressive stock bull Vexour 1 Phantom. A head count of 50 visitors was had who were greeted by the Mitchell family. Christopher Mitchell explained the different groups of cattle in close proximity to the farm yard and presented us with a full documented catalogue of all animals we were able to see. In conjunction we had a clipping and show prep demonstration. Two stock judging competitions and a guess the weight competition. Tea and cakes afterwards was greatly appreciated.

The SWHA committee would like to thank the Mitchell family (overall herd competition winners 2021) for their superb hospitality. 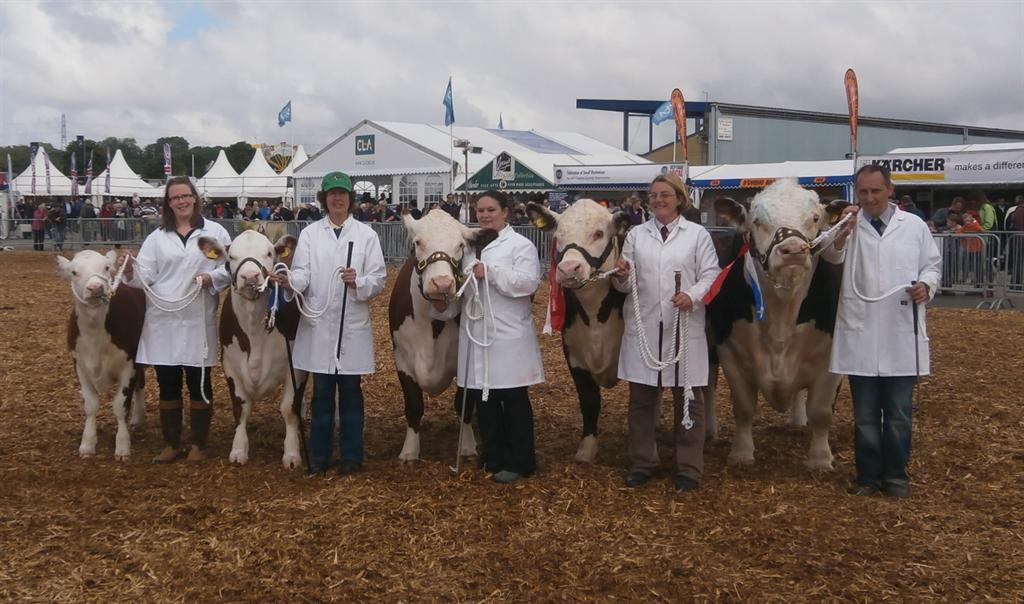 Our 2017 herd visits were to LANSCOMBE HEREFORDS on Sunday 30th July at Higher Henley Farm, Buckland Newton, Dorchester by kind permission of The Mitchell family. The family had turned their stock out to high standards as usual allowing us to have stock judging competitions. The herd was in two bunches running with two impressive herd sires Lanscombe 1 Maximillion and Branwyn 1 Emperor.

On Sunday 20th August we travelled to the wild North Cornwall coast to see the REDDIVALLEN HEREFORDS at Trevalga, Boscastleby kind permission of Anthony and Liz Brewer and family. The 420 acre award winning farm produces Organic Beef and Lamb consisting of 90 Suckler Cows and 300 Breeding Ewes set in an area of outstanding natural beauty. This is a great example of a suckler herd of hardy Herefords able to thrive in harsh weather conditions with driving wind and rains coming off of the North Atlantic and Irish Seas.

On Monday 25th September we had a visit to ‘HEREFORD HOUSE’ . Those that attended enjoyed very informative talks on the history and current issues of the Hereford breed and it was good to meet the new CEO James Sage. A herd walk to see BOUNDS HEREFORDS at their home at Weston Cider Mill & Restaurant by kind permission of H Weston & Sons Ltd. A delightful lunch was had before a tour of the impressive mill and their ‘modern’ cider press. Well worth a visit.

Devon County Show proved to be a great success as the SWHA won the Gold Award for best Breed stand in the Show!. Well done to James Greensill who also won the best stockman award whilst attending to the Lanscombe Herefords and was presented his award in the main ring.

The Annual General Meeting and Dinner with Herd Competition Awards had a good attendance with an exceptional amount of keen young breeders.

The year finished for us at the NBA Agrifest event at Exeter where we had a breed stand and were Second place overall.

The 2016 year starts with a big bang for the SWHA as we have three major county shows all within weeks of each other. The Breed stand at Devon County was kept very busy this year with much interest in the breed. Royal Bath & West Show saw a greater entry of Herefords than previous years.

Members were able to enjoy three herd walks this summer. Our first walk was hosted by Chris & Philip Caunter at The Hollystone Herd in South Devon. Their farm is nestled deep in a very grassy valley between Totnes and Kingsbridge. Everyone was so satisfied from eating a grand carvery dinner they were very delighted to have had a tractor and trailer ride around the farm to view the stock. Our thanks to Chris & Philip for a most enjoyable day.

The Hustyn, Breock & Nanscient Herds near Wadebridge, Cornwall was very well attended by about 70 head of humans. The Herefords certainly outnumbered the visitors! The stock were put into well managed bunches in and around the main farm buildings for optimum viewing. Many thanks to the Hawke Family for allowing us to see their animals and also for the splendid Tea afterwards.

The next walk was at the new premises for Jonathan and Rosemary Moorhouses' Cato Herd in Somerset. In the midst of renovations to the cattle sheds we were made most welcome. The newly installed line up of bull rearing pens and wash down area were very impressive! Plenty of well grown calves at foot could be seen prior to weaning. Jack Ellicot was kept busy showing guests how to make their own rope halters. Thank you Jonathan & Rosemary and their Stockman Chris Richens.

David Bell, commented that "Polo was a powerful and impressive beast and would take some stopping in any commercial class." Lanscombe 1 Orkney came 7th out of 17 in his class also sired by Brangwyn 1 Emperor. Orkney has since been purchased by Dendor Herefords. Caldicutt and Barclay Cup Winners Nicholashayne 1 Kite (pictured) won the Caldicutt Cup for most points gained during the 2013 showing season. Bred by Keith Prettejohn and Angela Kerslake. Lanscombe 1 Oliver won the Barclay Cup for opposite sex to winner, bred by Roger Mitchell.

Severnvale and Appleridge Herd Visit 2014 This year the SWHA were invited to visit the Severnvale herd for the annual herd visit where they saw a young herd of cows mostly sired by Ervie Express rearing this years crop of spring born calves (mostly sired by Venen Hotspur) under the rules of the CSSS. Hotspur was in residence and next years calves well on their way! A couple of in-calf heifers running with the home bred bull Severnvale Mack were admired by the group. Members also saw a small group of traditional cows and calves, showing the type of animal today's Hereford derived from. A ploughmans lunch was then served giving everyone a chance to socialise. In the afternoon, we travelled 10 miles north where members were welcomed by Martin and Deb to see their Appleridge herd near Berkeley. They have some strong cow families established showing much milk and capacity. The animal that stood out to me was the stylish home bred sire Appleridge Envoy, enhanced by a group of bulling heifers sired by him. Tea and cakes were served outside in the evening sunshine. Both hosts for the day were thanked in the usual manner. Edward G. Mills Chairman SWHA

HERD WALK On Saturday 22nd September 2012 the SWHA visited Moor Farm in Shropshire, by kind permission of Mrs Hazel Timmis and family. Hazel runs a very successful show herd 'Shraden' as well as a commercial herd of herefords. Twelve members were welcomed to their new farm shop and restaurant. Hazel and her daughter Melissa gave a very informative talk before setting out on the walk. Lunch was provided (and well needed!) and their own delicious hereford beef was sampled.Thank you to the Timmis family.

Thank you so much Mr & Mrs Ayres and family of Frenchstone Herefords for showing us their herd on 14th April. This was well attended by members travelling from all counties from within the South West Association Area. Andrew Hughes (professional showman) kindly gave a clipping demonstration and advice on preparing for the show ring on the newly acquired bull Dorepoll 1499 High Society. David Pascoe talked about what the judge looks for when judging best of breed. A fun judging competition was held and a superb afternoon tea on the lawn of the farmhouse with home made scones and Devon clotted cream!